ST. JOHN’S, Antigua and Barbuda – 19th April 2022…….Prime Minister the Hon. Gaston Browne will later this week receive the American Foundation for the University of the West Indies (AFUWI) prestigious Legacy Award for his leadership which facilitates nation-building, strengthening regional alliances, and creating a legacy that future generations can build on.

“Your passion and commitment to improving the lives of the people of your country are evidenced by the many initiatives you and your administration have implemented to address matters germane to nation-building. These include increasing the housing stock, reducing unemployment, improving health care via the upgrade of plant and equipment, increasing the number of medical practitioners, infrastructure upgrades of airports and seaports, funding for venture capital and entrepreneurial endeavors, and increasing investment in building a robust and competitive tourism industry,” Sir Hilary wrote.

Sir Hilary Beckles also highlighted their shared interest in increasing access to education for all Caribbean nationals and the vital role education plays in advancing the development agenda. “Increases in the capacity in primary and secondary schools and upgrade of physical plants are stark testimony of your commitment. It is therefore no wonder that Antigua and Barbuda is the site of The UWI’s 5th Campus housed on lands at Five Islands. This facility provides easier access to tertiary education for your citizens and citizens from the other OECS countries,” Sir Hilary noted.

The Awards Gala to be held in New York City on Thursday is themed “Together, through our resilience and determination, we can conquer any adversity.” This, Sir Hilary says is a perfect background due to Prime Minister Browne’s forceful and unapologetic dis-course on the issue of Climate Change, citing the apparent absence of urgency by the developed and industrialized nations to arrest the crisis meaningfully.

“Part of your abiding legacy will be the ability of the people of Antigua and Barbuda to leverage their resilience and determination to overcome challenges and to be better for it in the aftermath. The remarkable resurgence of your country’s economy, post the devastation caused by hurricanes Maria and Irma also stand as a formidable reference in the annals of history,” Sir Hilary pointed out.

Concluding his letter, Sir Hilary commended Prime Minister Browne for his signature brand of excellence and leadership in his role as Prime Minister and outlined that he will be among a select group of Caribbean leaders who were awardees to include the Hon. Sharlene Cartwright-Robinson, The Hon. Allen M. Chastanet, Dr. The Hon. Ralph Gonsalves, Dr. The Hon. Hubert Alexan-der Minnis, The Rt. Hon. P.J. Patterson, The Hon. Tillman J. Thomas, and the late David Thompson.

Prime Minister Browne will travel to New York to accept the award. 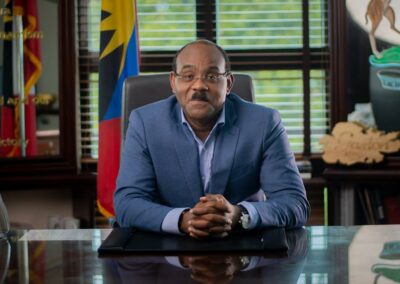 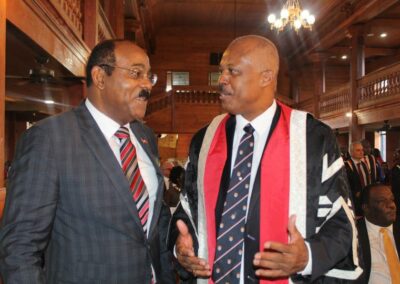