Caribbean Nations Unite to Save Soil

Caribbean Nations Unite to Save Soil

4 Caribbean nations sign MOU for the Save Soil movement, led by Sadhguru in historic moment

St John’s, March 12, 2022 – Heads of Government and Ministers for Health, Agriculture, and Environment from four Caribbean nations participated in an historic moment, endorsing the Save Soil initiative by signing a memorandum of understanding with Conscious Planet founder and global leader Sadhguru.

Trinbagonian singer and “King of Soca” Machel Montano, who played a critical role in galvanizing Caribbean leadership towards this movement, opened the event, sharing a firm commitment to use his music as “a platform to reach as many people with the critical message to Save Soil.” 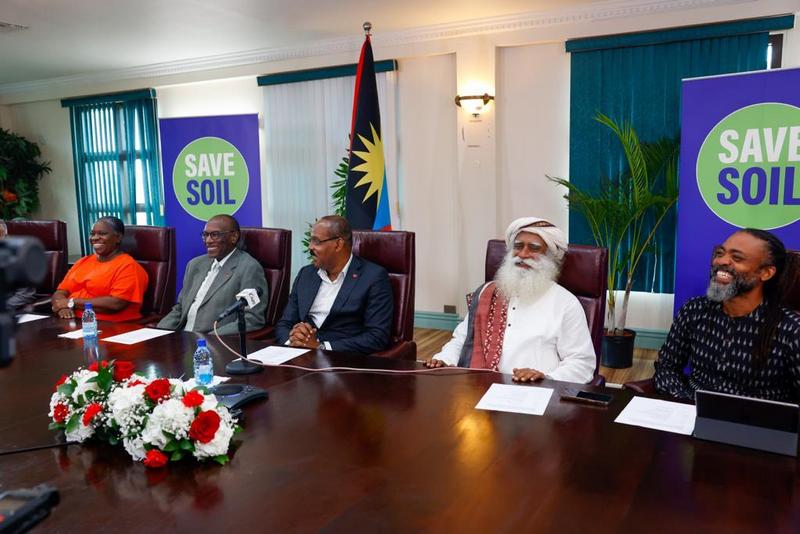 Honorable Gaston Browne, Prime Minister of Antigua and Barbuda, expressed his “pleasure to participate in this initiative to sign this memorandum of understanding with Conscious Planet as we [support] the Save Soil movement. The issue of soil degradation, which could potentially become soil extinction, is a significant threat to the planet. Over 30 years ago, when climate change was identified as a significant threat, it was small island states in the Caribbean that were in the forefront of this fight. It is instructive that, 30 plus years later, it is the very Caribbean small island states that are now seeking to drive this process of saving our soil from extinction.”

The United Nations Convention to Combat Desertification (UNCCD) predicts that soil extinction could become a reality if soil degradation continues at present rates. Moreover, the FAO estimates that all the world’s topsoil may be extinct in 60 years. By 2045, food production may drop by 40% as the population crosses 9.3 billion. Soil extinction could lead to catastrophic crises worldwide, including food and water shortages, droughts and famines, adverse climate changes, mass migrations and unprecedented rates of species extinction. 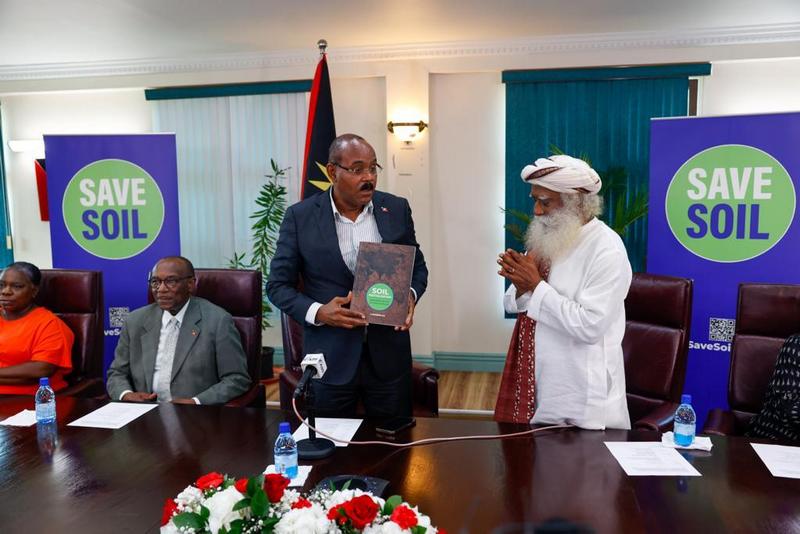 Prime Minister of St. Kitts and Nevis, Timothy Harris expressed his commendations “to bring this initiative to the Caribbean region” noting its “critical importance for the sustainability of all life on Earth.”

Prime Minister of Dominica, Roosevelt Skerrit shared his “absolute support” for the Save Soil initiative, with conviction that “agriculture holds the promise [to] feed the society [and] all people. We have to recognize that the soil is in fact the most important element on earth.”

Prime Minister of St. Lucia, Philip J. Pierre explained that his country “is at a stage where we need to revive our agriculture” and that “this initiative will suit us very well.” He was joined by the country’s Agriculture Minister, Alfred P. Prospere. 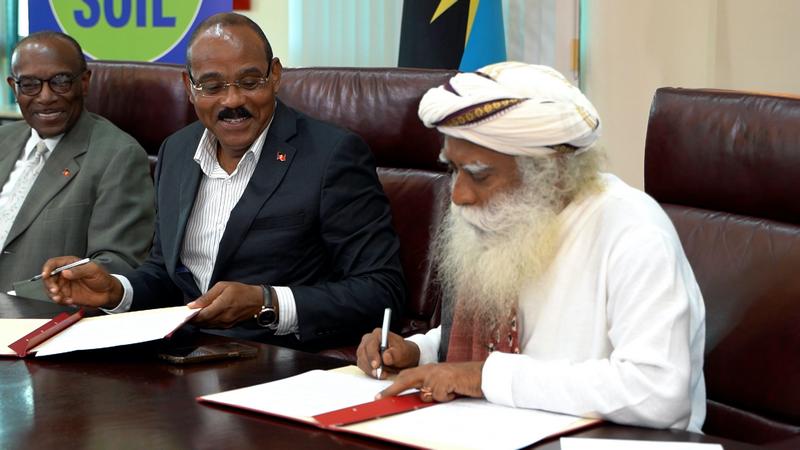 Sadhguru affirmed that “these small nations, these pearls in the ocean, [can] make that turn around and demonstrate” that every nation can and must save its soil in the interest of all future life on the planet. Additionally, he emphasized that “we have lost connection with what nurtures our lives. Seeing soil as an inert substance that you can extract from is a completely wrong approach. It is a living soil. This is the most important message that needs to go to the young generation and the future generations: soil is a living entity.”

The heads of government were joined by Antigua and Barbuda’s Minister for Health, Environment and Wellness, Sir Molwyn Joseph and Minister for Agriculture, Fisheries and Barbuda Affairs, Samantha Marshall. Special thanks were given to Special Economic Envoy and founder of Global Citizen Forum, Mr. Armand Arton for assisting in carrying this initiative forward to the Caribbean Leaders. Mr. Arton also joined the ceremony via Zoom.

The memorandum was created in consultation with the top scientists in the world, considering each region’s latitude, climate, economic conditions, and traditional agricultural practices. The resolution, titled Soil Revitalization – Global Policy Draft & Solutions Handbook was presented by Sadhguru and accepted by the Caribbean Heads of States as an urgent and unifying initiative to restore soil health.

Sadhguru is a yogi, mystic, and visionary. He has been conferred three presidential awards in India, including one for his environmental work as well as the country’s highest annual civilian award for exceptional and distinguished service. He’s spoken before the United Nations, World Economic Forum, World Bank, the UK House of Lords, TED, and countless global companies, and has also been invited to present at Oxford, Stanford, Harvard, Yale, Wharton, and MIT, among others.

About Conscious Planet – Save Soil Movement

Conscious Planet is a long-term global effort to raise human consciousness in order to inspire responsible human-environmental action. Recognizing our responsibility to our children and future generations, Conscious Planet aims to raise the consciousness of 3.5 billion humans, turn ecological issues into election issues, and ensure we leave behind a planet that supports nature and all life.

Save Soil is a global movement launched by Sadhguru to address the soil crisis by inspiring 3.5 billion people from around the world to stand up for Soil Health. Our efforts are to drive policy change worldwide to safeguard, nurture and sustain soils to a minimum of 3-6% organic content. 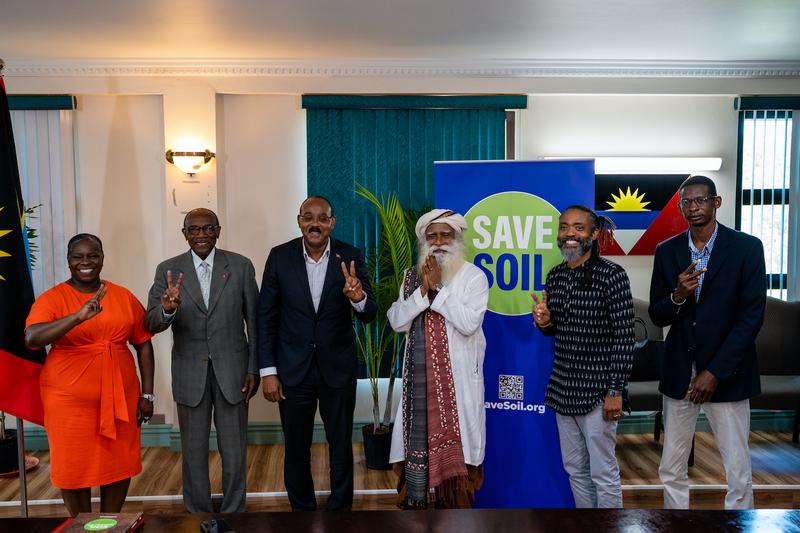 Through a combination of global media outreach, live events, meetings with government officials, and a 30,000-km motorcycle trek across 24 countries, Sadhguru and a committed network of thought leaders, visionaries and influencers aim to involve 3.5 billion people in this movement to rekindle our relationship with nature and drive the policy changes needed to restore our planet and ensure a thriving world.